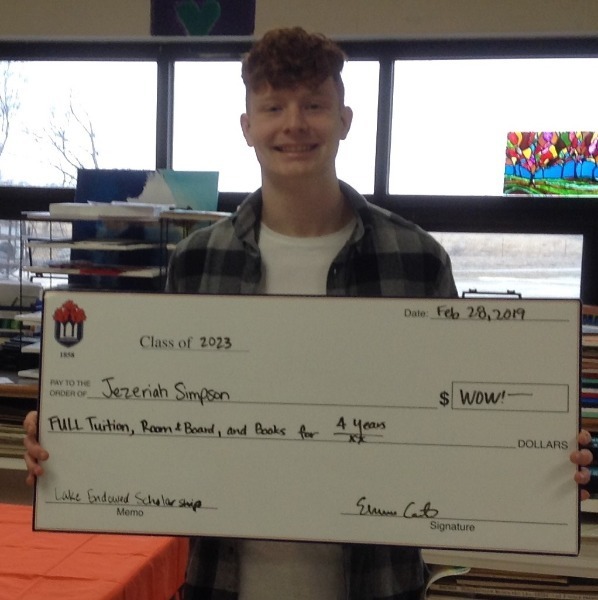 The Ada Hopkins Lake Endowed Scholarship was made possible by a generous $2 million gift from Baker alumni Joseph Lake. Lake attended Baker in 1937, where he met his wife and went on to have 3 daughters, Sally, Margaret and Nancy.

Throughout his life, Lake knew that he wanted to do something to help future students so they could attend school, and focus on their education instead of having to work and go to school like he did. In his passing, Joseph left more than $2 million and established the scholarship on behalf of his mother Ada who was a teacher and stressed to Lake and his family the importance of an education, and attending college.

“He wanted to give the gift to students so they wouldn’t have to worry about meals and food and where they were going to sleep at night,” Joseph’s daughter, Margaret, said. “He wanted them to have a chance to just be students to benefit from just being students.”

Upon learning about the award, Simpson, who plans to attend Baker next fall and hopes to eventually become a shoe designer and manufacturer, was overwhelmed with the generosity and couldn’t believe his dream of becoming a Baker Wildcat was coming true. He knew that although Baker was the university he wanted to attend, it was going to be a large financial commitment for his family and wasn’t sure if they would be able to afford it.

“The family’s faith and trust that things would work out were confirmed when Jezeriah found out he was the recipient of this scholarship,” Director of Admissions Emma Carter said. “It was amazing to witness as he was truly in shock.”

Founded in 1858 as the first university in Kansas, Baker is a private institution that educates traditional and nontraditional students through small classes, innovative instructors, and rigorous course work. Fortune 500 CEOs, New York Times best-selling authors, and Super Bowl champions all proudly claim Baker as their alma mater. The university is home to four schools: College of Arts and Sciences, School of Nursing, School of Education, and School of Professional and Graduate Studies. Baker offers undergraduate through doctoral programs.